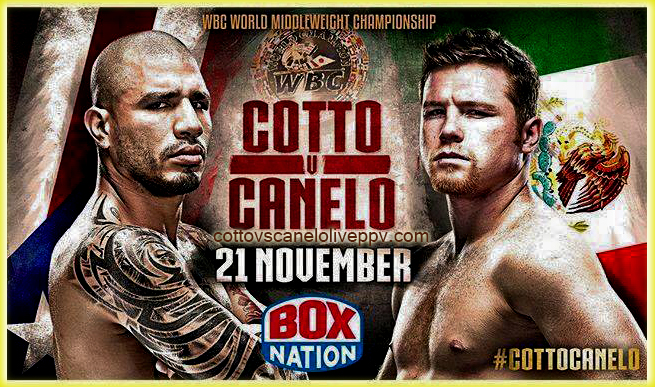 Really? Seriously? There is no way that Canelo won as many rounds as those scores reflected. Canelo may have won the fight by a score of 115-113 (which is what ESPN’s Dan Rafael scored it as), but none of the actual scores made any sense at all.

Clearly, Miguel was disgusted by those numbers and he left the ring immediately and headed to his dressing room, where his promoter, Jay Z, congratulated him on a great fight. Trainer, Freddie Roach, stated that the fight was much closer than those numbers and that Cotto fought tremendously and that his defense was unbelievable.

Per Yahoo Sports: Cotto actually out-landed Alvarez, 629-484, but that was largely due to an inordinate number of jabs. Cotto threw 374 jabs to Alvarez’s 186, so he stockpiled the punches.

But Alvarez was raking him with lead right hands, uppercuts and hooks throughout the fight. CompuBox statistics had Alvarez connecting on 118 of 298 power shots, while Cotto landed just 75 of 255.

Even a 114-114 draw would have been okay but I would be more content with a 115-113 Canelo win. These scores should remind us all of the corruption that still exists in boxing today. It’s just sad.

But Canelo absolutely deserves credit for fighting a great fight and agreeing to face Gennady “GGG” Golovkin in 2016. That should be an incredible fight for as long as it lasts. Golovkin is the most terrifying middleweight in all of boxing right now and you can rest assure that judges won’t be needed on fight night. GGG will most likely easily knock out the red-headed Mexican when they meet. But the fight should be highly entertaining for as long as it goes.

As for Miguel Cotto, he didn’t look like a 35 year old man when he faced the 25 year old Canelo. Both men looked great and they entertained fans as everyone had expected. The 11,200 strong in the arena and the millions watching around the world were treated to elite-level boxing for 12 rounds. Therefore, the fans were the true winners.

If Miguel Cotto would like to continue to box, then the welterweight division or junior middleweight division might be the way to go. He is still a top notch fighter but he needs to face guys who aren’t much bigger than he is.

As for the other fights on the pay per view, here are the results (per Fightnews.com):

In a brutal fight, unbeaten super featherweight Francisco “El Bandido” Vargas (23-0-1, 17 KOs) dethroned WBC champion Takashi Miura (29-3-2, 22 KOs) with a ninth round TKO on Saturday night at the Mandalay Bay Hotel & Casino Events Center in Las Vegas. Vargas got off to a great start and rocked Miura in round one. Miura came back to knock down Vargas hard in round four. Miura staggered Vargas at the end of round eight. Vargas then dropped Miura early in round nine then viciously battered the champ. Referee Tony Weeks finally stopped it, although the game and hurt Miura was still fighting. Time was 1:31. Vargas was behind on two scorecards at the time of the stoppage.

What were your thoughts on tonight’s main event? Was Canelo’s win really one sided in your opinion? Or was it a lot closer than the judges had it?