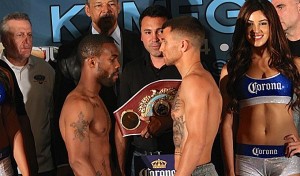 Although Vasyl Lomachenko is almost a 2:1 favorite to win tonight’s title boxing fight against American Gary Russell Jr., the odds have been shrinking in the last few days.  This spectacular boxing event will take place tonight in the Stub Hub Center in Carson, California and it will be the co main event of the Showtime boxing event tonight.  Most boxing experts and boxing sites know that this fight is the true main event as Robert Guerrero vs Yoshihiro Kamegai isn’t as intriguing as this match up.

For those who are into betting boxing, per FightNews.com: “The Top Rank-promoted Ukrainian star is currently a -190 favorite against Golden Boy fighter Russell, who is at +165. The over/under is 9.5 rounds with “over” at -370, the “under” is +310.”

Lomachenko (1-1, 1 KO) and Russell (24-0, 14 KO’s) will battle for the vacant WBO featherweight championship, which Lomachenko lost to Orlando Salido in March 2014.  Since Salido was unable to make weight for that fight, he wasn’t eligible to win the title, despite the fact that he won that fight via split decision.  For those who watched it, Salido fought dirty the entire 12 rounds and the referee did nothing about it.

The 2008 U.S. Olympian, Russell, doesn’t believe that the two time Olympic gold medalist, Lomachenko,  poses any threat to him in this fight.  The American believes that he’s faster, stronger, bigger, and has better footwork than the Ukrainian star.  Although we agree with most of his boasting, we don’t believe that he’s the bigger fighter.  Lomachenko towers over the American and although the Ukrainian isn’t as muscular as Russell, he’s still shredded and he looked significantly bigger than the American at yesterday’s weigh ins.

Combat sports are all about styles because styles make fights.  Having said that, we believe that Gary Russell, Jr. is going to put on one hell of a show tonight.  His speed and footwork will most likely cause Lomachenko a lot of problems throughout the fight.  For those sitting at ringside, the difference in speed and tempo will be evident from the opening round.  Unless Lomachenko is able to time his shots very precisely, there is no way that he is going to stop the American.  Russell will expose a lot of holes in Lomachenko’s game tonight and the boxing world will probably shun the Ukrainian’s impressive 396-1 amateur record as a result of this (potential) loss.

If you’re into sports betting and you’d like to make some money, we believe the smart money is on Golden Boy Promotions fighter, Gary Russell, Jr. to defeat Top Rank fighter, Vasyl Lomachenko via unanimous decision tonight.