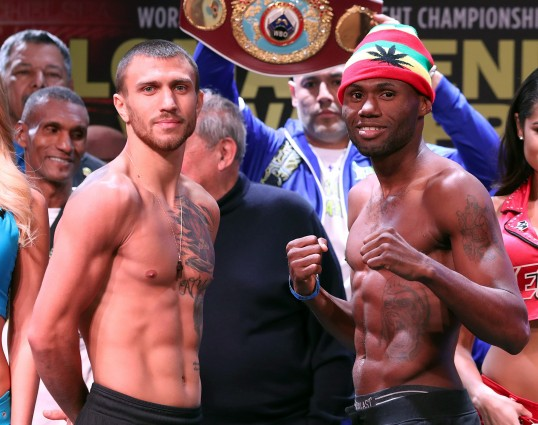 In a match that started with Vasyl Lomachenko as a 9:1 favorite in some sports betting sites, the Ukrainian slugger didn’t disappoint his fans in attendance and around the world via HBO boxing telecast. Lomachenko (7-1, 4KO’s) battered the previously undefeated Nicholas Walters (26-1-1, 21 KO’s) for 6 rounds until Nicholas had had enough and quit right before the start of round 7. It was disappointing to say the least since the beating that Walters took didn’t warrant quitting. The crowd agreed with this assessment and loudly booed when Walters was being interviewed by HBO’s Max Kellerman.

But to Walters’ credit, he was very classy in defeat and openly admitted that his 343 days of inactivity affected his performance in the ring tremendously. The man who easily dismantled Nonito Donaire and knocked him out in October 2014 was either long gone or still no match for Vasyl.

The first round started out with both men feeling each other out. Lomachenko might have won the first round by a small margin but from round 2 onward, Lomachenko used a lot of intelligent movement to set up his right jabs and furious combinations. Another thing that Vasyl did was make his opponent miss a lot of shots and then counter him as he reset to his stance. By the time the 5th round started, it was evident that Lomachenko was going for a knockdown and or knockout. The most surprising thing was Walters giving away that special “0” so easily by not putting up a fight after round 6 and suddenly quitting.

Regardless of our opinion, Nicholas Walters was a real deal fighter who would have tested anyone in the ring and the fact that Lomachenko blew right through him is astounding. Vasyl is undoubtedly one of the best pound for pound fighters in the world right now.

After the fight, Max Kellerman had asked Lomachenko who he would like to fight next and the Ukrainian stated that the next man that he would like to face would be Francisco Vargas. Although that fight would most likely be more entertaining that this fight, it would be another easy win for Vasyl.

Perhaps Bob Arum can set up a rematch between Orlando Salido and Vasyl Lomachenko so that the latter can avenge his only defeat? Wouldn’t that make for a more marketable fight?