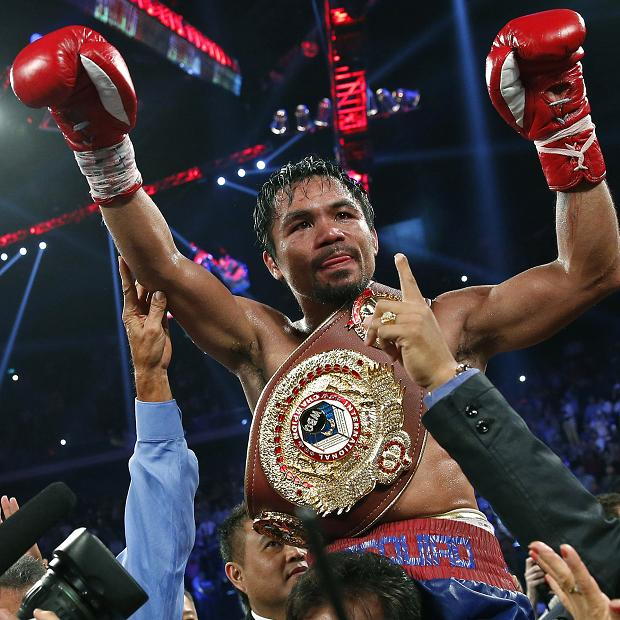 Manny “Pac Man” Pacquiao (58-6-2, 38 KO’s) defeated Timothy “Desert Storm” Bradley (33-2-1, 13 KO’s) at the MGM Grand Garden Arena in Las Vegas before a packed house of almost 15,000 fans, in their rubber match and captured Bradley’s WBO welterweight title. Pacquiao knocked down Timmy twice; once in round 7 and once in round 9. This was the first time that Bradley was knocked down twice by anyone and Manny is the only fighter to defeat Bradley (which he has done twice).

Personally, I thought it was an entertaining fight with some great tactical action but if you were looking for a killer Pacquiao knockout victory, this was not a fight for you to watch. Manny is clearly a very compassionate man and was not remotely willing to stop his foe. Pacquiao probably could have stopped Tim anytime in the fight but a combination of his compassion and his cautiousness since the fourth Marquez fight wouldn’t allow him to do so.

Bradley did a great job in round 8 by brawling with Manny and landing a bunch of shots on him. He may have even hurt the Filipino icon in that round but Manny smiled and welcomed it and even whispered something to Timmy after the exchange. Pacquiao was sporting a bruise below his left eye after that exchange. But the dominance of Tim was short-lived because his aggressiveness opened him up to clean shots by Manny. The knockdown in round 9 saw Bradley flip backwards on his way down. His eyes were clearly glazed and his legs were temporarily gone but it was Manny’s compassion that allowed Timmy to survive the fight.

Teddy Atlas, Timothy Bradley’s trainer, took the blame for Bradley’s loss. Sorry folks, but I don’t buy it. The trainer should not be blamed for the loss. Manny is an anomaly in the sport of boxing. His speed, power, and intelligence is beyond special; there is nothing that Bradley could have done to win this fight. Absolutely nothing!! Atlas is a very good trainer but unless he had the power to give Bradley some Divine intervention in the ring, no one is to blame. Manny is just too good in the ring.

After the fight, Max Kellerman asked Manny if he would be interested in a match up against Canelo Alvarez (a fight that Freddie Roach would love to train Manny for) or a rematch with Floyd Mayweather, but Pacquiao remained adamant about this being his last fight. He did state that he would think about it but for now, he would like to devote himself to the Filipino political system as a senator (if he wins the election).

Should Pacquiao face Canelo Alvarez? If so, when? How would the fight end? Would sports betting have Pacquiao as the favorite to win the fight? Please share in the comments section below. We would love to hear from you.