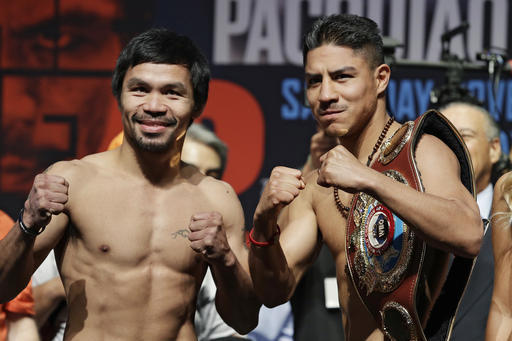 Manny “Pac Man” Pacquiao scored a unanimous decision victory over the once beaten Jessie Vargas at the Thomas and Mack Center in Las Vegas before 16,000 plus fans. Two judges scored the fight 118-109, which sounds about right, and one judge inexplicably scored it 114-113 for Manny. That 114-113 score had to have been the most concerning part of the evening!

Although Pac Man dropped Vargas with a clean, straight left to the chin in round 2, he was the kind-hearted nice guy that no longer goes in for the kill. So a fight where the Manny Pacquiao from 2009 or 2010 would have finished any man in devastating fashion as quickly as possible, lasted 12 lop-sided rounds. Pacquiao landed 147 of 409 total punches with rabid fans in attendance. Others in attendance were none other than Floyd “Money” Mayweather, jr and Terrence Crawford.

Regardless of what anyone says, we believe that a rematch between Mayweather and Pacquiao would still generate more buys than any pay per view in boxing since their last fight. But is Pacquiao a man who can really compete at an elite level?

Manny is an excellent boxer who would still beat almost any welterweight fighter out there but the man is a senator in the Phillipines and he trained in his spare time for this fight. Sure, that was enough for him to beat Jessie Vargas but a full training camp would be in order for him to rematch Floyd and certainly to take on the future of boxing, Terrence Crawford. And days away from his 38th birthday, Pacquiao should face opponents that he has a good chance of beating. Guys like Amir Khan, Kell Brook, and Canelo Alvarez would be good stylistic fights for Manny Pacquiao.

Terrence Crawford, Kieth Thurman, Errol Spence, and Danny Garcia are nightmare match ups for the Filipino icon. Even Freddie Roach would agree. There is a reason why Floyd has not taken on any of those guys. Pacquiao should learn from Mayweather. At the end of the day, Manny is a human being and age is catching up to him.

Pacquiao is either slipping in skills or he intentionally cruised to an easy victory against Vargas. Regardless of what it was, is Pacquiao still able to compete against boxing’s best welterweights? More importantly, should he?
Please comment below. We would love to hear your thoughts.