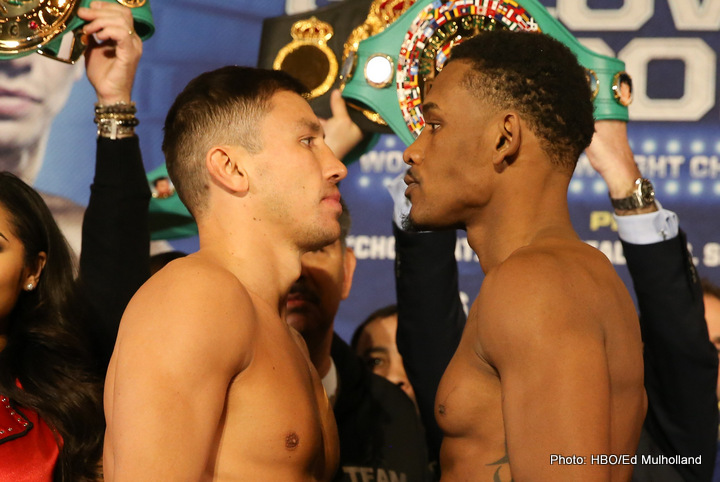 One of the greatest middleweights of all time, the current boogeyman in boxing, Gennady Golovkin (36-0, 33 KO’s) will be defending his multiple belts tonight against his toughest test to date, Daniel Jacobs. Jacobs (32-1, 29 KO’s), has been in the boxing game for a long time and has been extremely overlooked when it comes to talent and potential in the sport of boxing. Tonight, that’s about to change.

We believe that tonight will be a historic moment on HBO pay per view boxing (live from Madison Square Garden in NYC), where Daniel Jacobs will have the opportunity to face the man known as Triple G for the IBF, WBC, and WBA world middleweight titles. Actually, since Daniel Jacobs refused to be weighed today, he lost his opportunity to win the IBF world middleweight boxing title. But he can still secure the other two belts if he wins tonight.

When a solid welterweight, Kell Brook (36-1, 25 KO’s), moved up two weight divisions and put his undefeated record on the line against GGG on September 10, 2016, he was beaten and battered but he held his own in the early rounds of the fight. He landed more clean, effective shots on Gennady than anyone that we could think of. Despite the fact that David Lemieux was the strongest puncher that GGG had ever faced, it was the movement, footwork, defense, and combinations that Brook used that allowed him tremendous success against the Kazakh warrior. But as the time went on, it was the size and power of Golovkin that took a toll on Kell. GGG broke Brook’s orbital bone and the fight was ultimately stopped in round 5 when Brook’s corner threw in the towel.

Size won’t be in Golovkin’s favor tonight, though.

Daniel Jacobs, is significantly taller, bigger, and most likely stronger than Golovkin. Unlike David Lemieux, Jacobs uses a lot of movement and is extremely fast for a man his size. Even though the champ has taken solid shots from former opponents, he’s never faced a threat like Daniel Jacobs. Daniel is a man who faced cancer and beat it. He’s got the never give up attitude that few fighters have. Sure, many do have it but when it comes to overcoming just about anything because losing is simply not an option and winning will change your life tremendously, Daniel Jacobs knows that he’s got the opportunity of a lifetime here. A once in a lifetime opportunity. He knows that this fight is a Mike Tyson vs Buster Douglas fight of today. Jacobs knows that a win would open up the doors to millions of dollars for him and his lovely family. A loss would put him back to mid-card status and render him a solid contender but nothing more.

The Canelo Alvarez fight is the one that everyone wants Golovkin to take. It’s not Gennady’s fault. Anyone that follows boxing knows that Oscar De La Hoya does not want his top stud (Canelo Alvarez) to face GGG. We do believe that Canelo genuinely wants to test himself against Triple G but the outcome of that fight would more than likely be a highlight reel knockout win for Golovkin. For that very reason, brilliant promoter, Oscar De La Hoya is trying to avoid that fight altogether.

Sports betting has Golovkin as a huge favorite to win tonight’s main event. No one is giving Daniel a chance to win. We actually believe that Daniel Jacobs and his trainers have studied the Kell Brook fight against Golovkin and they’re preparing traps to set tonight. It will more than likely be a right out of the gate approach by Jacobs to win round 1 with a lot of combinations and counterpunches. That will probably be a prelude to the rest of the fight except that Jacobs will probably show footwork that no one in the middleweight division has shown. Abel Sanchez, Golovkin’s trainer, will more than likely not know what advise to his man once he sees Jacobs landing flush shots. It will be the movement, counterpunching, and powerful combinations that will allow Daniel Jacobs to drop and stop Gennady Golovkin at the Garden tonight. We expect the world to be stunned.

But anything is possible in combat sports.

For tonight’s main event, we predict a huge upset. Daniel Jacobs will more than likely stun the world and stop Gennady Golovkin at some point in the middle of the fight.

Does anyone else out there agree? Disagree? Please comment below as we would love to discuss this some more with our fans and followers.