Mayweather vs Pacquiao: A Controversy In The Making 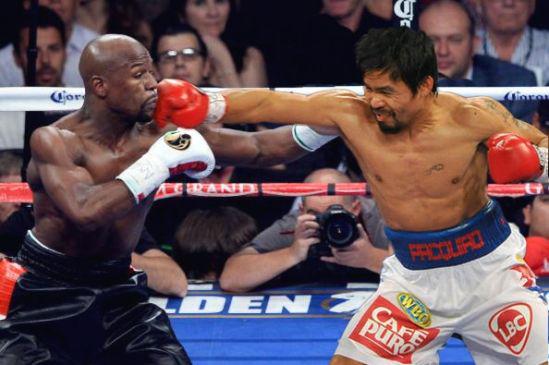 Floyd Mayweather, Jr (47-0, 26 KO’s) will face Manny “Pac Man” Pacquiao (57-5-2, 38 KO’s) in what will be the most profitable boxing event in history.  But boxing Pacquiao is no easy task and it’s unfortunate if Mayweather believes that he will be successful come fight night.

Floyd has never ever faced anyone as fast as Manny Pacquiao and none of Mayweather’s opponents have the kind of volume punching and footwork that the Pac Man has.  Although the Filipino’s last knockout was in 2009, when he stopped Miguel Cotto in the 12th round, it’s the evolution of Pacquiao that no one is talking about.  Although Manny was knocked out by his arch rival, Juan Manuel Marquez in Dec 2012 (in their fourth fight against one another), Pacquiao was actually out-boxing Marquez by out-counter punching him.

Manny made a mistake by getting careless against his Mexican enemy and went in for the kill, only to get knocked out.  To this day, I declare that Marquez was clearly on some type of “juice” and he got lucky with that shot because he was getting his ass handed to him up until that point.  Memo Heredia, noted PED specialist, was in Marquez’ training camp and I believe that that partnership used illegal methods to win that fight.  It’s no wonder that Marquez looked like shit against Tim Bradley a few months later in a match that Bradley narrowly won.

Getting back to the topic, Floyd Mayweather, Jr and his team knows the significance of this match and the cost of a loss to Pacquiao.  Therefore, the fix is in, folks!!

Historically speaking, Floyd has a habit of complaining about fouls that his opponents are not making at all.  He’s alleged that Marcos Maidana bit his glove last September when they fought for the second time.  Sorry Floyd!! Maidana did no such thing.  He’s complained about illegal shots to the back of his head and illegal holding when he fought both Shane Mosley and Miguel Cotto.

With Manny Pacquiao being a squeaky clean fighter with lots of class and no history of fouls, Mayweather will no doubt be using his clout to decide, behind the scenes, who the referee will be, who the judges will be, and he will most likely even make sure that the Anti Doping Agency gives Manny multiple blood tests right before the fight.  Floyd lives in Las Vegas and Manny Pacquiao is the outsider.  Floyd’s house, Floyd’s rules!!

The part that no one is thinking about, or not speculating about, is that Bob Arum is one of the greediest human beings on planet Earth and he would gladly throw Manny to the wolves if he was getting some serious money under the table.  So basically, Bob Arum may be in on the fix.  I have no doubt that Arum arranged for Pacquiao to get robbed by the judges in the first Tim Bradley fight and this fight is the biggest fight in history.

If Floyd is able to successfully clinch and tie up Manny and use his illegal elbow shots and also complain that Manny is using illegal shots, Floyd will be able to get the paid referee to deduct a point or two or even three against the Filipino icon.  Deduction of points can seriously put a fighter in a deficit and during a big title boxing event like this, it won’t matter how much Pacquiao or his trainer, Freddie Roach, complains.  The Showtime boxing announcer, will be the stooge that he is and just make up all kinds of reasons to justify the ref’s decisions.

Another reason to support this theory is that Mayweather is now a two to one favorite to win this fight and if Manny Pacquiao defeats Floyd Mayweather, then the casinos will have to pay out some serious money since there is loads of money already being bet on Manny.

Pacquiao will have to knock out Mayweather to win in Las Vegas.  As much as I love Vegas, that city is riddled with corruption.  A great example of this would be Canelo Alvarez’ win over Erislandy Lara in Las Vegas in 2014.  Anyone with a brain knows that Lara won 10 rounds out of 12 and Canelo was awarded the decision since he was a 2:1 favorite and the casinos could not afford to lose out on money.  Lara was ripped off in a fight that he clearly won, Vegas made and kept lots of money, and both men went on with their careers.  People forget these things.

If my theory is correct, then the only question left is, will there be a rematch? If so, why bother?