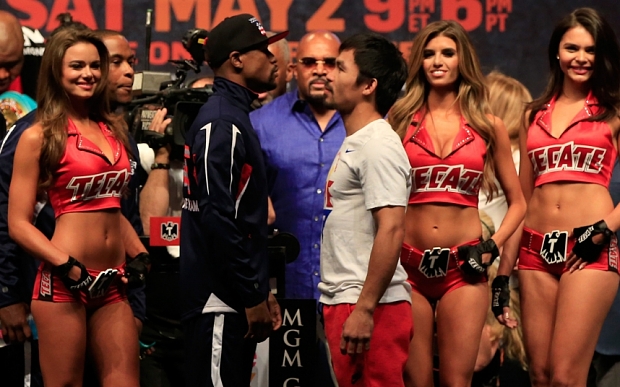 Pro boxers Manny Pacquiao and Floyd Mayweather, Jr. weighed in before a crowd of 11,500 at the MGM Grand for their mega-bout.  Mayweather tipped the scale at 146 pounds and Pacquiao weighed in at 145 pounds.

This will surely be the biggest boxing event of all time!!

Please note that Pac Man ate a huge lunch earlier in the day and even ate a Butter Finger candy bar right after his staredown with Floyd.

The best part was that when the men faced off, Mayweather kept his game face on and Pacquiao started to giggle a few seconds into the staredown and even said “thank you” to his opponent for finally making this fight happen.

For those who can recall, it was on May 01, 2008 when Manny weighed in against Ricky Hatton and at the staredown, Manny giggled then too.  On May 02, 2008, Pacquiao knocked out Ricky Hatton in the second round of the fight with a violent left hook, prompting referee, Kenny Bayless to call an end to the bout.

As a side note, referee Kenny Bayless will also be the referee for the fight of the century.

Please don’t be fooled by the Filipino’s kind nature.  DO NOT mistake his kindness for weakness.  Manny Pacquiao is a killer shark when he’s in the ring.  Don’t be surprised if he’s courting Mayweather into his mind games, only to destroy him on fight night.