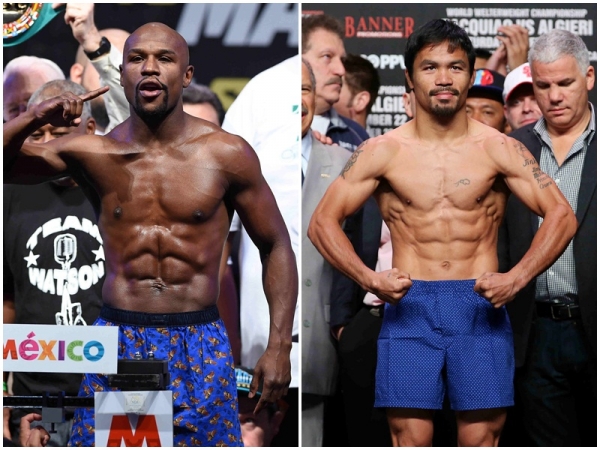 A boxing event unlike any in the history of combat sports will take place on May 02, 2015.  Floyd Mayweather, Jr. will face off against Manny “Pac Man” Pacquiao in a welterweight showdown that the world has been waiting for since December 2008.

For those who have been following Showtime boxing and HBO boxing and their coverage of both pro boxers, anyone can see that Floyd has been adding a lot of muscle on for this fight.  He’s been weight training a lot and he’s been chopping wood as well.  That’s packed on quite a bit of muscle on his 5’8” frame but it’s sure to slow him down.  More muscle equals less speed.

It was Juan Manuel Marquez that used that strategy for his December 2012 showdown with Pacquiao.  It was the fourth time that the Mexican was facing his Filipino rival and he finally landed the perfectly timed right hand to Manny’s chin that saw him finally defeat his rival, by knockout nonetheless.

Floyd is trying to follow in Marquez’ footsteps, no doubt.

There’s a small problem here; Marquez was always willing to engage with Manny and he paid dearly for doing so.  Before Marquez landed that perfectly timed right hand, Pac Man was beating the hell out of Juan.  The Filipino was on his way to maybe even stopping his rival but he got overzealous and went in for the kill and hot knocked out by a perfect right hand.

Freddie Roach has trained Pacquiao to never fall for that again!

Look for Floyd to start off very fast and active in round one.  If Floyd can time Manny and land his right hand at will, then he might be able to win via decision.  But Pacquiao and his trainer, Freddie Roach, have a plan A, B, C, D, and E for what Floyd brings to the fight.

Mayweather knows that he’s the bigger man and that he may have no choice but to use Marquez’ strategy against Manny.  There is no doubt that his new physique is an indication of what Floyd has up his sleeve.  But will he succeed?