Gennady Golovkin vs Andre Ward: The Most Hyped Up Potential Boxing Event Today 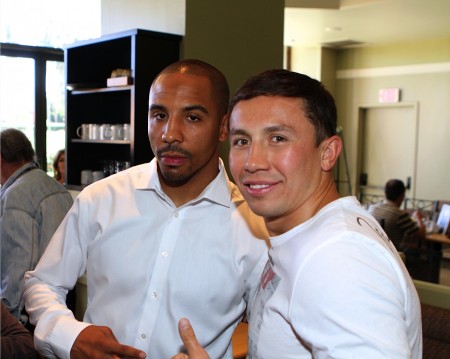 Ringside boxing pundits are all clamoring for a future showdown between Gennady “GGG” Golovkin (31-0, 28 KO’s) and Andre Ward (27-0, 14 KO’s) at some point because they believe that Andre Ward is probably the only man in boxing who can possibly defeat Golovkin.  He can’t.  Sorry to be so blunt.

The middleweight champion of the world just defeated Marco Antonio Rubio via brutal knockout in the second round this past Saturday and Andre Ward has not been in the ring since November 2013 when he defeated relatively unknown Edwin Rodriguez via “ultra boring” 12 round unanimous decision to retain his super middleweight WBA boxing belts.

Besides the fact that Ward is in a higher weight class than Golovkin and he’s an Olympic Gold medalist, let’s take into account the fact that Golovkin is BY FAR the bigger draw.  If Ward were to face Golovkin, the fight should absolutely take place at Golovkin’s weight of 160 pounds.  Why should the bigger draw have to move up a full eight pounds if he’s the one putting “asses in seats?”

With Ward having to shed the additional eight pounds, his body might not be equipped to handle the punching power of Golovkin.  Gennady also has 350 amateur matches under his belt and finished his amateur career with a spectacular 345-5 record.  Golovkin would be by far the hardest hitter that Ward has ever faced (much stronger than Edison Miranda, Arthur Abraham, and even Mikkell Kessler).

So is this really why the fight is the most hyped potential bout in boxing? Not exactly.

In combat sports, styles make fights.  Andre Ward has a nightmarish style for just about any pro boxer in the world.  It’s not just that he’s a very talented boxer but it’s mostly because of his illegal holding and head-butting style.  Sorry folks!! No one wants to call a spade a spade but let’s face the fact that Ward’s fights have ALL shown him to hold illegally and often times head butt his opponents “unintentionally.” How is it that no one has called him for illegal holding and head-butting until his last bout in November 2013?  Is Ward even as great as boxing experts claim? Sorry, we think not.

Well, Ward has mostly fought in his home state of California and so it would devalue him greatly if he were DQ’d or fined for illegal tactics.  It would just be bad for business since outside the ring, Ward is a very classy man and a great representative of the sport of pro boxing.

Golovkin vs Ward would ultimately turn out to be a typical Ward snoozefest if the fight were to take place anywhere in California.  But if the fight were to take place in Las Vegas or even another venue that isn’t Ward-friendly, then the fight would either end via brutal knockout in favor of Golovkin or Ward would most likely end up getting disqualified for excessive holding and possibly even excessive head butting.  Gennady is too smart a fighter to fall for that and he has every right to demand Ward to meet him at middleweight if he’s interested in such a huge boxing event.  Sadly, the fans would suffer if Golovkin vs Ward comes to fruition as the fight itself would most likely be a huge disappointment and the fans will feel ripped off.  It would be bad for boxing and bad for the boxers.

Golovkin has the world in the palm of his hands right now so the best fights for him would be (in no particular order): Miguel Cotto, Canelo Alvarez, Julio Cesar Chavez, Jr., and Carl Froch.  Every single one of those fights would be exciting as hell for as long as they last.  Whether or not any of them wants any piece of the middleweight version of Mike Tyson is a whole other story, though.

Please check out some amazing podcasts at: www.chokedoutradio.com