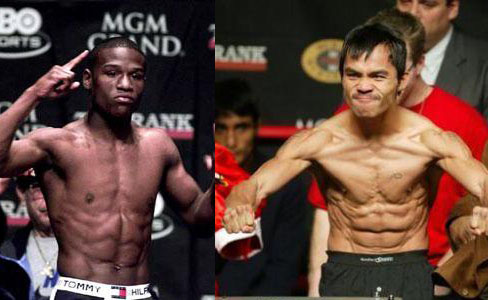 Although the fight is not even close to being signed, Floyd “Money” Mayweather (47-0, 26 KO’s) is the favorite to defeat Manny “Pac Man” Pacquiao (56-5-2, 38 KO’s) if the fight were to happen today.  Floyd if a 3:1 favorite to defeat Manny according to sports betting site, oddschecker.com and williamhill.com.  Clearly, those sites are either delusional or they lack anyone with sound boxing knowledge to create realistic odds.  Regardless, those odds mean nothing as the fight is not signed and if it were, the odds would probably have Floyd as a slight favorite to win, simply due to his undefeated record and Pacquiao’s disastrous 2012 fights (that bogus decision loss to Tim Bradley and the knockout loss to Juan Manuel Marquez).

Without a doubt, Floyd Mayweather and Manny Pacquiao are the two best pound for pound boxers in the world right now.  Neither man has any equal when it comes to speed and a whole array of boxing talent.  Sure, there are guys like Keith Thurman and Gennady Golovkin who are certainly solid boxers, but neither of them has accomplished what Floyd and Manny have in their illustrious careers.  Neither man is as quick as Mayweather and Pacquiao.

If we look at Floyd Mayweather’s career, one thing is evident: he has taken on a large pool of talent but NONE of the guys on his resume can match Manny Pacquiao’s speed and style.  Not a single one.  Manny, on the other hand, has faced some fast guys: Morales (three times), Marquez (four times), Barrera (twice), Tim Bradley (twice), Jorge Solis, and Oscar Larios.  I’m sure that many people would quickly point out that none of those men can match Floyd’s speed but we’d beg to differ.

Floyd’s career has seen him carefully shy away from tough match ups (ie – Antonio Margarito in his prime, Shane Mosley in his prime, Kostya Tszyu in his prime, a prime Oscar De La Hoya, Erik Morales, Juan Manuel Marquez in his prime).  Sure, Mayweather took on Mosley, Marquez, and De La Hoya but Oscar and Shane were both past their primes (yet Mayweather still struggled) and Marquez just didn’t show up to fight; he showed up to collect a paycheck.  Lastly, up until Pacquiao’s name came up, Mayweather NEVER CARED ABOUT ANY BLOOD TESTING OR ANYTHING.  “Money’s” the one making excuses and demands, not Manny.   Sorry Mayweather fans, the truth hurts.

How in the world can “Money” seriously be such a huge favorite to win?  But then should Pacquiao be the favorite to defeat Mayweather?

Our answer is we don’t know.

Pacquiao’s got a lot on his plate as usual but he is, after all, a human being.  How long can Manny juggle multiple things like a political career, a basketball team, and a whole host of other businesses in the Phillipines? If Pacquiao only focused on pro boxing, then we believe that he should be the absolute favorite to defeat Mayweather.

To have Floyd as a 3:1 favorite against Manny is just offensive.  There is absolutely no basis whatsoever for such absurd odds.  For God’s sake, Mayweather actually struggled against Marcos Maidana in May 2014 and Maidana’s as slow as molasses!! Mayweather’s legs are clearly not the same and he’s taking more and more punishment with every opponent that he faces.

Manny Pacquiao has been rejuvenated since 2012 and he is a whole new fighter, thanks to Freddie Roach.  Pac Man has taken on all comers and beat them all throughout his career.  He grew up in the most poverty-stricken place as a child and never had a feeling of entitlement or a feeling of stature amongst any of his boxing peers.  He came to fight and maintains that same attitude to this very day.

Mayweather, on the other hand, picks his opponents very carefully.  He chooses guys who lack speed.  Sure, he picks some strong guys like Canelo Alvarez, Miguel Cotto, Shane Mosley, and even Marcos Maidana but all of them were slow boxers.  Shane Mosley in his prime was very quick but when Floyd fought him, he was clearly a shell of his old self.  A great example of this statement is Floyd’s refusal to face Amir Khan.  Most ringside boxing observers believe that Khan would pose some serious problems to “Money” due to his speed.  It’s a risky fight so Mayweather keeps avoiding it.  But in the case of Mayweather vs Pacquiao, let’s hope that HBO Boxing and Showtime Boxing can put this fight together so that each man can showcase his talents in the ring.

Pacquiao is, as quick, or even quicker than Mayweather.  Both men are very strong and hit hard and both men are on opposite ends of the style spectrum with Floyd Mayweather being the defensive wizard and Manny Pacquiao being the offensive genius.  In all combat sports, styles make fights.  In the case of Pacquiao vs Mayweather, both men are so evenly matched that an intelligent sports betting site would have this as a pick ‘em fight.  Anything else is enough to make us want to place a hefty wager on this one.