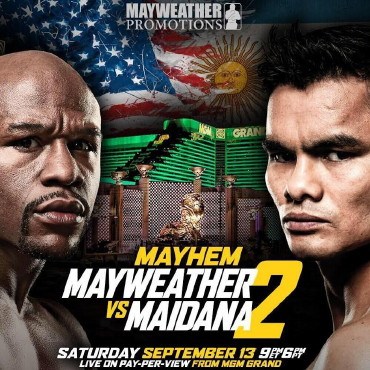 For their rematch, Floyd Mayweather, Jr and Marcos Maidana have each promised their fans victory in their lackluster promotion of this event.  Maidana and most ringside boxing experts agree that in order to win, Marcos will most likely have to win by knockout.  Seriously, how likely is that?

Although Mayweather’s legs are not what they used to be, the man is still extremely fast and he can still pack a punch.  He may not be known for knockouts (unless his opponent is looking at the referee, of course), he still throws solid punches and lands clean very often.  Maidana is simply too slow to get the job done against a defensive master like Floyd.

But does this mean that Maidana cannot win this fight at all? Is it simply impossible to knock out Floyd Mayweather?  Not exactly.

After re-watching their first match a few days ago, I concluded that the fight was either a draw or Maidana actually won the fight, seven rounds to five rounds.  According to sports betting experts, Floyd was a 12:1 favorite to win the first fight.  Vegas casinos were not going to pay out tons of money in the case that Maidana actually won the first fight.  There was simply too much at stake.

Marcos Maidana has hands of stone and he can certainly knock down just about anyone, but his only chance of earning an official victory this Saturday night against Floyd Mayweather will be via knockout.  If he can knock out Floyd the way Antonio Tarver did to Roy Jones, Jr. in 2004, then there will be no denying him.  But if this fight is close or even if Maidana does indeed win a majority of rounds, Floyd will get the official victory from crooked judges.

Boxing is a sport and those betting boxing know that to win a serious sum of cash in boxing is to hope for a spectacular knockout.  Let’s refer to Canelo Alvarez getting a victory over Erislandy Lara in a fight where Lara clearly won at least nine rounds of the fight; Vegas casinos did not want to pay out huge sums of money so the fight ended in a screwjob decision.

Unfortunately, Marcos Maidana isn’t as huge a draw as Floyd Mayweather, Jr and can’t generate the kind of pay per view sales that Mayweather can.  The judges and the boxing world will have no reason to award him a decision victory in the case that he deserves it.  In boxing and combat sports today, unfortunately, no one cares about a travesty or a screwjob; it’s all about the next fight and about superfights like Manny Pacquiao vs Floyd Mayweather.  With that fight on the horizon, it’s sad to say that no one cares to see Maidana win this Saturday because there is too much at stake and even the fans would rather see Pacquiao vs Mayweather than Maidana earn a victory against Floyd.  So unless there is a blue moon out on Saturday, don’t expect to see Marcos Maidana earn a victory unless he can land that perfect shot on Floyd and knock him out.