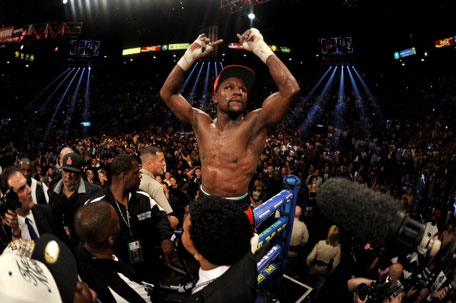 Without a doubt, Mayweather defeated Maidana in the not so anticipated rematch of their May 2014 clash. Although Marcos Maidana did land a decent number of clean shots on the defensive wizard, it wasn’t enough for him to walk away with the victory.

Their first match up was five months ago and it turned out to be one hell of a roller coaster ride for Mayweather. Maidana came out swinging for the fences and beat up Mayweather from pillar to post in what many fans thought was a match that Maidana clearly won. As is the case in Vegas, the judges handed the victory to Mayweather via split decision regardless of what Maidana accomplished that night.

The rematch, however, left little doubt that Floyd Mayweather was the superior boxer. Although the Argentinian slugger felt that he did enough to win tonight, the only controversy that was truly present was the fact that Floyd Mayweather blamed Marcos Maidana of biting him on his hand in the eighth round. After watching several replays, there was absolutely no way that Maidana did any biting.

Referee Kenny Baylis did deduct a point from Maidana in the tenth round for using his elbow to push down Mayweather. The fact that Maidana was not warned prior to the point deduction raised some eyebrows. Especially since Floyd was never warned for blatant holding throughout the fight.

To Mayweather’s credit, he used a lot of lateral movement and clinching to halt Maidana’s predictable offense. He was able to dodge and counter his opponent effectively throughout the fight. All three judges awarded Floyd with the win via scores of 115-112, 116-11, and 116-111. Floyd successfully defended his WBC and WBA boxing titles and improve his record to (47-0, 26 KO’s).

Showtime boxing analyst, Jim Gray, asked Floyd Mayweather about a future bout against the one and only Manny Pacquiao and Mayweather surprisingly showed interest in making the fight happen. He’s throwing the ball back into Pacquiao’s court and insisting that he doesn’t duck anyone so let’s see what happens. The best thing to happen would be for Pacquiao to defeat Chris Algieri in November then immediately challenge Floyd to a showdown in May 2015. Whether or not that happens remains to be seen.

Regardless of what people thought about Floyd’s performance tonight, we have to give the man his just due. He defeated a very tough opponent tonight and he did so pretty convincingly. It certainly wasn’t as entertaining as their first encounter but he got the job done.

Unfortunately, the entire event was horribly unentertaining and we are sure that those who paid $74.95 for it must have felt ripped off.

In other bouts on the pay per view boxing event, Leo Santa Cruz knocked out former sparring partner and friend, Manuel Roman in the second round. Mickey Bey defeated Miguel Vazquez via split decision in a very disappointing IBF lightweight championship bout. In a major surprise of the night, James De La Rosa defeated super tough Alfredo Angulo in a ten round slugfest. De La Rosa actually dropped Angulo in round two. This was definitely De La Rosa’s greatest victory. Angulo is clearly on a downward spiral as this was his third straight loss. And Humberto Soto outworked John Molina, Jr in their junior welterweight contest.

All in all, there should hopefully be many more match ups to be made for Showtime boxing in the near future. But if the next Mayweather fight is not against Manny Pacquiao, Miguel Cotto or Amir Khan, then I hope that the boxing world will just boycott the event and send a strong message to the promoters.

Would such a tactic send a strong enough message and force those major fights to finally take place? If so, will Floyd be able to walk away undefeated against lightning quick opponents like Pacquiao, Cotto and Khan? If Mayweather took so much punishment from a super slow Maidana, can he truly dodge Manny’s, Cotto’s and Amir’s punches in bunches? Can he walk away with those victories and retire undefeated?