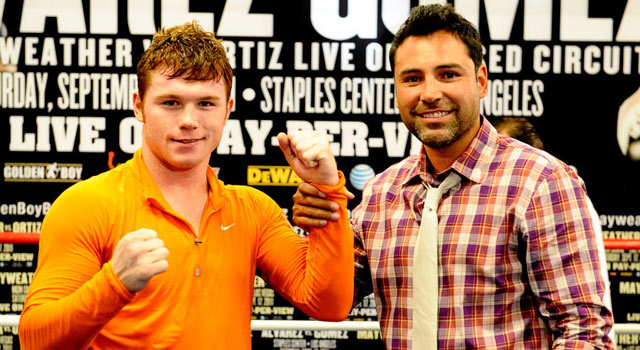 Oscar De La Hoya is making sure that he makes good on his promise of giving the fans the best fights possible.  A boxing event with the name of Canelo Alvarez is sure to bring in huge ratings for any network; since 2013, Golden Boy Promotions had defected to Showtime boxing in a split that saw HBO boxing refuse to work with Golden Boy or any of its fighters.  The new formed partnership is a HUGE plus to boxing fans and a HUGE blow to Showtime boxing.

Since Richard Schaefer’s exit from Golden Boy a few months ago, De La Hoya has worked vehemently with Bob Arum and his remaining stable to put on the best that title boxing has to offer.  Although Canelo will be facing the very mediocre Joshua Clottey this December, the fact that Canelo will be on HBO boxing is a very big deal.  The 24 year old Mexican superstar has a cult like following in Mexico and an ever growing fan base here in the United States as well.

Another plus side to this deal is that if Golden Boy Promotions is now secured to be on HBO, then making Golden Boy vs Top Rank fighters will be a much simpler task.  Showtime boxing would most likely come out as the loser in this deal.  However, there are a bunch of Golden Boy fighters who are signed with Al Haymon as their advisor/manager, so that might complicate the situation a bit.  With Oscar De La Hoya in the midst of a $50 million lawsuit against his former business partner, Richard Schaefer, the legalities won’t be settled until the case is reviewed.

Regardless of the legal issues, as boxing fans, we should all tune in to support Golden Boy Promotions and HBO boxing since they seem committed to bringing fans the fights that want to be seen.  Such is not the case with Al Haymon and Showtime boxing.  As a result, if fans boycott Showtime boxing, then a strong message will be sent over to them and maybe then we will see fights that fans will tune in for.  Let’s exercise our power as fans and pay for the best deal possible and for now, that lies solely with HBO Boxing, Top Rank Promotions, and Golden Boy Promotions.