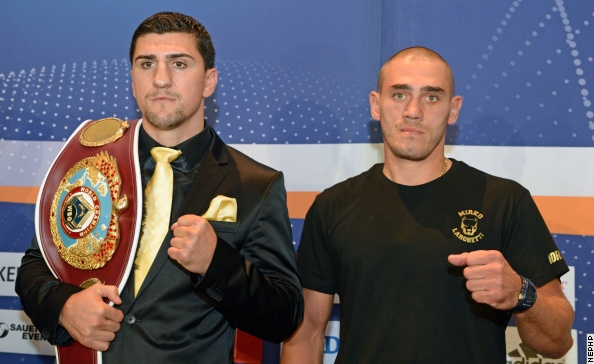 The WBO cruiserweight world champion, Marco Huck (37-2-1, 26 KO’s) will be defending his belt against undefeated Mirko Larghetti (21-0, 13 KOs) at the Gerry Weber Stadium in Halle/Westphalia, Germany on Saturday, August 30th, 2014.  This will be Huck’s 13th title defense is he is able to win against Larghetti.  This would tie Johnny Nelson’s cruiserweight record.

Although Huck has not lost a fight in 7 years, it’s a shame that he is not a well known fighter in the United States.  He has never boxed in America and is therefore not mentioned in any pound for pound rankings.

“Nelson was an exceptional athlete who did not back down from any challenge. I am no different. His style of fighting was not the most spectacular but it was successful. It is an honor to get the chance to equal his record. But in contrast to Nelson, I will not struggle against an Italian in my thirteenth defense. My aim is to beat Larghetti first, then Nelson’s record!”

Regardless of the fact that almost all of Huck’s title defenses have been in Germany, he has taken on all comers.  He has never backed down from anyone (unlike our good buddy, Floyd Mayweather) and he has constantly improved over time.

Sauerland Promotions will be promoting the boxing event in Germany.  Here are other matches on the card and their weigh in results:

We will be reporting the results of the card on Saturday night.  Stay tuned.