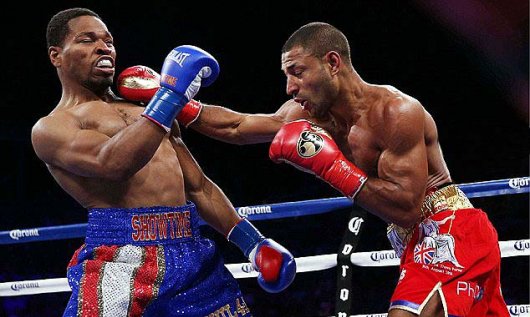 Shawn Porter (24-1-1, 15 KO’s) tasted defeat for the very first time in his professional career this past Saturday night at the Stub Hub center in a boxing event promoted by Golden Boy Promotions.  England’s Kell Brook (33-0, 22 KO’s) was the man to hand that defeat to Porter and earn himself the IBF welterweight title.

Over 7,000 fans filled into the Carson, California arena for title boxing at its finest.  Both, “Showtime” Porter and “Special K” Brook, are major forces in the current welterweight division.  Despite the fact that Porter was a 3 to 1 favorite to win (for those who are all about betting boxing), Brook used his footwork, speed and timing, and ring generalship to out maneuver Porter’s constant pressure.

Showtime boxing put on a solid main event with Porter and Brook squaring off against each other.

With this win, Kell Brook is a serious contender to face Floyd Mayweather, Amir Khan, Manny Pacquiao, and even Marcos Maidana.  Although Brook called out Mayweather and Thurman, the biggest money fight for him would be Amir Khan at England’s massive Wembley Stadium.  Kell Brook vs Amir Khan would easily sell 80,000 tickets and earn themselves HUGE paydays for themselves as well as Showtime boxing.  But the fairest fight would be for Brook to give Porter a rematch.

Who do you think Kell Brook should face next and why?