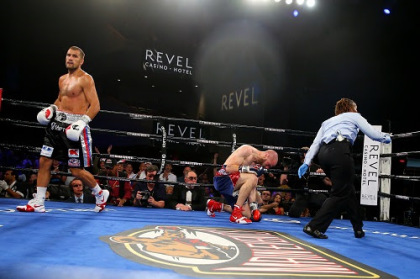 Sergey Kovalev (25-0-1, 23 KO’s) defeated Blake Caparello (19-1-1, 6 KO’s) at the Revel Casino in Atlantic City this past Saturday night (August 02nd) as expected and he delivered huge ratings for HBO boxing as expected.  Title boxing was at its finest that night when Kovalev easily defended his WBO light heavyweight title en route to a second round stoppage of the former undefeated Australian challenger.

Nielsen ratings has reported that the viewership reached 1,052,000 viewers on Saturday night to watch Sergey destroy his challenger.  Kovalev’s last title fight was in March against Cedric Agnew drew 1,000,000 viewers as well.

Bernard Hopkins better prepare for one hell of a boxing event because the “Executioner” may just end up getting executed when he steps into the ring with the “Krusher” from Russia in November.  The bout has been confirmed and it will make for an extremely intriguing match up between a knock out artist and a polished boxer (who likes to fight dirty).

Without a doubt, Sergey Kovalev vs Bernard Hopkins will end up being a great boxing event that HBO boxing is sure to cash in on in a big way.