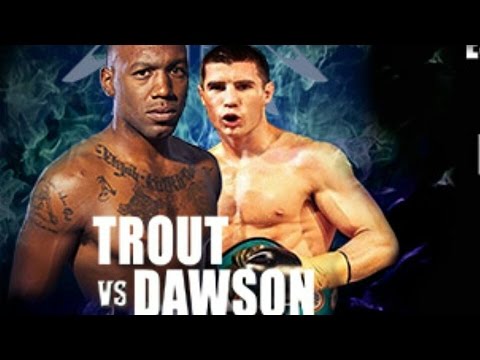 Despite being dropped to the canvas twice, Dawson used good footwork, a constant left jab and solid straight lefts to defeat Australian hard hitter, Dawson.  It was Dawson’s right hand that dropped Austin twice in the third round but it wasn’t enough to end the fight.  Trout actually dropped Dawson in the eighth round with a solid straight left but Daniel ended up holding out for another 2 rounds en route to a unanimous decision loss.  All three judges scored the bout 97-90 in favor of the former junior middleweight champion, Austin Trout.

Despite Trout’s victory over Miguel Cotto in 2012, it’s tough to fathom that he has fallen off the radar since losing to Canelo Alvarez in what many fans thought was an absolute draw.

In other ESPN boxing fights, here are the other results (courtesy of Fightnews.com):

Colombian Erick Bone (15-1, 8KO) earned a unanimous decision over Mahonri Montes (28-4-1, 20KO) of Los Mochis, Mexico, in the junior welterweight division over ten rounds . Bone was quicker and more precise as he landed multi-punch combination on the always charging Montes. The Mexican fighter was the taller fighter but never was able to put that into play as Bone succeeded in getting on the inside and attacked the body as well as the head. Judge Tony Crebs scored it a lopsided 100-90 while Max DeLuca and Fernando Villareal saw it an identical 97-93.

Former Olympian Michael Hunter (6-0, 4KO) administered a clinical beating on journeyman Harvey Jolly (15-21-1, 7KO) of Detroit, Michigan, before forcing referee Jack Reiss to stop the fight at the 53 second mark of the fourth round of a scheduled heavyweight six. Jolly never had an answer for the constant attack from Hunter of Las Vegas, NV.

In an all-action eight round welterweight fight, Commerce, CA’s Joaquin Chavez (9-14-3, 2KO) pulled the upset over Jessie Roman (17-2, 9KO) with a split decision win. Chavez looked like a man on a mission as he out hustled Roman for the majority of the fight. Chavez dropped Roman near the end of the fifth round with an overhand right. Roman pushed in the last round but was never able to deal with the activity from Chavez. Scores were 77-73 and 76-64 for Chavez while the third judge saw it 76-74 for Roman.

In the second upset of the night, Los Angeles heavyweight Avery Gibson (4-6-2, 1KO) handed Danny Kelly (6-1-1, 5KO) his first professional loss by simply outworking him for six scheduled rounds. Gibson stayed on top of Kelly for the majority of the fight and never allowed for Kelly to put together and offensive. The final tally was 60-53, 59-54 and 57-56.

A street fight broke out between young featherweights Juan Funez and Fernando Fuentes in an all-out four rounder. Fuentes scored more early on but Funez closed better as he began to land the harder and more accurate punches in the last two rounds. The last round was the busiest of the two as they fought until the final bell. A draw would have been fair as judge Antonio Villareal saw it with a 38-38 but Max DeLuca and Fritz Werner over ruled him with 39-37 each for Funez giving him the unpopular majority decision.

San Bernardino, CA’s Joshua Conley (9-0-1, 6KO) remained undefeated with a unanimous decision over Antonio Urista (5-1, 2KO) over six rounds in the junior middleweight division. The bigger Conley, who is trained by Henry Ramirez, scored the harder and more precise punches but Urista walked right through them and went after Conley with wild punches. Conley was the busier of the two and took the decision with scores of 59-55 twice and 58-56.

Egyptian knockout artist Ahmed Elbiali (6-0, 6KO) did it again with a perfectly placed right hand to the temple of the game Dwayne Williams (4-4, 1KO) of Detroit, Michigan. Referee Pat Russell didn’t need to administer a count since Williams fell face first to the canvas. After a couple of tense minutes, Williams regained his composure. Official time was 1:51 of the first round of a scheduled light heavyweight four.

Middlweight Kyrone Davis (4-0, 2KO) won a lopsided unanimous decision over John Worthy (3-7, 1KO) over four rounds. It was all Davis as he scored almost at will. Worthy’s best trait was that he could stay upright for all four rounds. Scores were 40-36 three times.

It took only 1:57 of the first round for Kareem “Reemo” Martin (2-0-1, 2KO) to stop over matched first timer Taif Harris (0-1) of Palmdale, CA. An over hand right from Martin of DC spectacularly dropped Harris early on and seconds later it was another right as Martin went for the finish. Harris surprisingly beat the count but a body shot was the final blow. Once Harris hit the deck for the third time, referee Jack Reiss stopped the action.

After a point was taken for a low blow early in the first, pro debut Thomas Hill (1-0) of Milwaukee, Wisconsin, settled down and easily outboxed Las Vegas, NV’s Enrique Montes (0-1-1) over four junior middleweights rounds. Scores were 39-36 three times.

After dropping the tough Arturo Urena (26-18-1, 22KO) in the third from a straight right, undefeated Javontae Starks (10-0, 7KO) proved to be too much at the 1:35 in the fourth of a scheduled four in the 154-pound division and forced third main in the ring Pat Russell to jump in ad stop the fight.