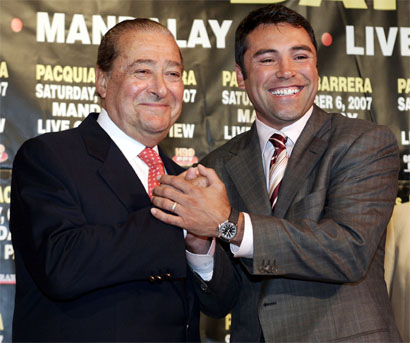 Pro boxing has had a cold war for a while now and it’s been between Oscar De La Hoya’s Golden Boy Promotions and Bob Arum’s Top Rank Promotions.  Boxers in each respective banner have not been able to face off against each other since both camps refused to work with one another.

Well, Oscar De La Hoya has been very vocal about ending the cold war in order to create mega fights that the fans want to see.  At the top of that list would be Manny Pacquiao vs Floyd Mayweather.

Since Mayweather has started his own promotion, he will no longer have ties to Golden Boy Promotions once his Sept 13th titile boxing fight against Marcos Maidana has ended.  But, superfights such as Manny Pacquiao vs Canelo Alvarez, Timothy Bradley vs Keith Thurman, and Ruslan Provodnikov vs Danny Garcia are all going to become very real possibilities.

This news is like the UFC working with Bellator or WWE working with TNA.  This could be the beginning of a huge and much-needed shakeup in boxing.  Will both promoters be able to work together? Besides Pacquiao vs Mayweather, what other fights would you like to see as a co-promoted event?  Please participate in the comments section below.