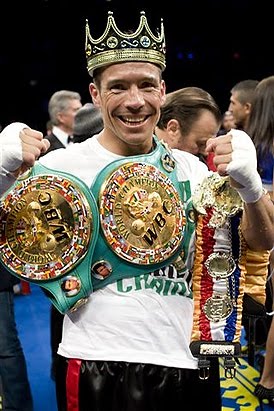 Miguel Cotto had put a beating on Sergio Martinez On June 07, 2014, unlike anyone ever has.  The fight was stopped before the start of the 10th round when Martinez’ corner decided that Sergio was in no shape to continue.  Despite the fact that Martinez has not looked like an elite fighter since November 2010 (when he knocked Paul Williams out cold), the man known as “Maravilla” has decided to shun the ringside boxing pundits and continue to fight.

Martinez (51-3-2, 28 KO’s) lost the Ring, WBC, and the Lineal middleweight boxing titles to Miguel Cotto that night.  Although Martinez was the favorite to win that fight, Cotto was incredible that night and Martinez was clearly a shot fighter.  In an era when many boxers don’t know when to call it a career, Sergio is probably at the top of the heap who refuse to ride off into the sunset.

Pro boxing is usually about making money and reveling in the fame and the glory that comes with title boxing fights and so it becomes difficult when boxers have to say goodbye.  They often believe that their bodies are capable of certain feats that their minds are clearly not.  Such may be the case with Martinez.

His body has been riddled with injuries and he has undergone multiple surgeries over the course of the last few years.  Lou Dibella, Martinez’ promoter, is standing by his fighter.  He is having Sergio looked at by top doctors in New York City.  If those doctors give Martinez the green light to continue, then we can expect to see Sergio attempt to make a historical comeback.

In Martinez’ defense, we are trying to understand the mental distress that he is in.  He is clearly one of the greatest middleweight fighters of the modern era and he has made a very good living via pro boxing.  It’s easy for boxing sites and so called “experts” to urge him to just hang up his gloves but essentially, the man would be giving up the potential to earn millions of dollars.  It’s a lot easier to tell someone to do that than to actually do it.  And if he’s cleared by doctors and he’s not mentally or physically damaged, then who are we to tell him what to do?

Do you think Sergio Martinez is finished and should just retire? Or does he still have something left in the twilight of his career? Please share your thoughts in the comments section below.  We thank you for visiting our site.