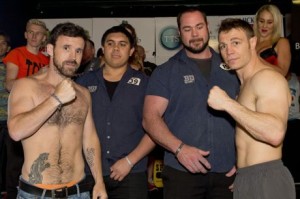 Australian boxer, Michael “The Great” Katsidis (29-6, 24 KO’s) will face Graham “The Duke Of” Earl (26-4, 12 KO’s) for the WBU lightweight boxing title from the Convention Centre Toowoomba in Australia on July 04, 2014.  Their first match up was in Earl’s hometown of London, England and the fight took place at the Wembley Arena.  Michael Katsidis defeated Graham Earl in February 2007 in round 5 via TKO for the vacant interimWBO lightweight title.  Regardless of who won back in 2007, each man is worthy of being considered a world champion.

Anyone near the Convention Centre Toowoomba should get these hot tickets because those at ringside will be treated to one hell of a war! Neither man cares much for defense and neither man is afraid to get hit in order to land a trademarked bomb on his opponent.

Both men made the 135 pound weight for their clash on July 04th but security had to quickly separate both boxers as they were ready to throw hands right at the scales.  Whether or not these men are trying to sell tickets at the Convention Centre Toowoomba or they genuinely hate each other, the one that is certain is that Australian fans will be treated to a worthwhile boxing event.

Regardless of the fact that few American boxing sites might cover this fight, we are one of the few who will report out on the outcome.

As for a prediction: Katsidis will probably defeat Earl once again but it may end up going longer than the 5 rounds that the first fight went.  Look for a referee stoppage or a straight knockout by Katsidis but as you all know: in combat sports, anything is possible.

Who do you predict to win? And how?