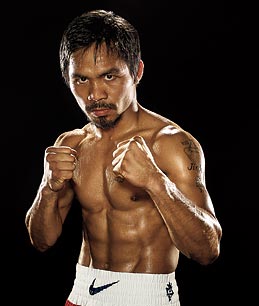 Pound for pound great, Manny “Pac Man” Pacquiao will defend his WBO boxing title against budding American prospect, Chris Algieri.  The fight will be promoted by Top Rank Promotions and will be a HBO boxing event to be shown on pay per view.

Algieri earned this dream fight after controversially defeating “The Siberian Rocky” Ruslan Provodnikov on June 14, 2014.  Although many boxing sites were split on who should have won that bought, this writer believes that there was some home cooking involved in Brooklyn’s Barclays Center when the judges handed Algieri the decision.  Even HBO boxing had the bout in Provodnikov’s favor by a pretty significant margin.

Pacquiao, who usually fights at welterweight, will require the Long Island native to move up seven pounds for the bout in November.  Although Algieri is a tough kid who took some serious punishment from Russia’s Provodnikov, he has never faced anything like Hurricane Manny!!  To say that this bout is a mismatch would be a HUGE understatement.

Manny Pacquiao would love nothing more than to fight Floyd Mayweather, Jr. in a boxing event that would shatter records all over the world but Mayweather has refused to deal with Top Rank Promotions and uses that as a main excuse for not facing the Pac Man.  Unfortunately, Pacquiao vs Algieri, is a huge insult to boxing fans as this is a major step down in competition for the Filipino icon.  But in Manny’s defense, Top Rank doesn’t have a large enough stable for him to choose from and since Golden Boy Promotions and Top Rank Promotions are not co-promoting (yet), these are the fights that Pacquiao will have to deal with.

I will order this pay per view because Manny Pacquiao is my favorite boxer but a large majority of boxing fans won’t, and I can’t say that I’d blame them.  Pacquiao vs Algieri is a horrible boxing event.