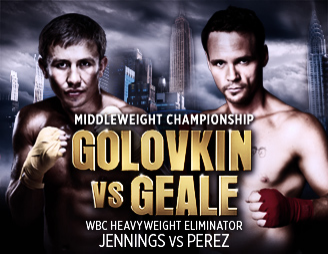 Geale showed up in shape and willing to move and mix up his attack but it wasn’t enough as Golovkin’s jab was landing almost at will and GGG’s wide array of attacks were finding their mark. Although Golovkin started out slow in the first round, he still did enough to win the first frame.

The victory marked Golovkin’s 17th consecutive knockout and this will most likely go down as a huge ratings success for hbo boxing.

When asked by Max Kellerman who Golovkin would like to fight next, the one name that was at the top of his list was Miguel Cotto. Folks, mark my words: if that fight is to happen in the next year, look for it to be a HUGE main event and look for Freddie Roach to pull out all stops in his preparation of Cotto. Stay tuned.

In the co-main event, Bryant Jennings scored a split decision win over Mike Perez in what turned out to be a mostly disappointing fight. Both men did nothing to impress boxing analysts or fans and the fight often saw the 8,600 at Madison Square Garden boo at the lack of action.

Bryant Jennings will now go on to face the winner of the Stiverne vs Wilder fight. Personally, I think that Mike Perez deserves a rematch because an incompetent referee deducted a point from Perez for a cheap shot despite the fact that there was no warning given by the ref. Had that deduction not been taken from Perez, the fight would have been a draw.

All in all, HBO boxing put on an event that pleased most boxing fans and established an even brighter star in Gennady Golovkin. If boxing sites are to criticize the co-main event, we will not complain, but if those sites wonder whether or not the boxing event was a successful one, we would say that it certainly was. Did Golovkin shine through and raise his stock? Certainly. Therefore, HBO boxing can proudly say: “mission accomplished!!”

Per Fightnews.com, here are the undercard results of the other fights at Madison Square Garden:

Cruiserweight Ola Afolabi beat up Anthony Caputo Smith in three rounds. Afolabi (21-3-4, 9 KO’s) hurt Caputo in the second and knocked him down twice in the third. After the second knockdown, referee Steve Smoger took a close look at Caputo Smith in the corner and, on the advice of the ringside physician, elected to call a halt to the carnage. Impressive and exciting win for Afolabi, the former cruiserweight title challenger. Caputo Smith, who was cut over the left eye, is now 15-4 with 10 knockout victories.
Welterweight Dusty Harrison (23-0, 12 KO’s) won a unanimous decision in a dull fight against journeyman Wilfredo Acuna (14-15, 11 KO’s). All three judges submitted identical scores of 80-72. Acuna was hurt in the fourth and fifth rounds but Harrison couldn’t capitalize enough to score a knockout or even a knockdown. Dull fight and an uninspiring performance from the DC-based Harrison.
The first bout of the night on the Golovkin-Geale under card only lasted 43 seconds. That’s due to a left hook to the body of Yankton Southern delivered from unbeaten junior welterweight Julian Rodriguez. The shot was so effective that it left Southern on the canvas for a rare, full 10-count. With the victory, Rodriguez moves his overall ledger to 5-0 with three wins via stoppage. Southern is just 4-6, 4 KOs.