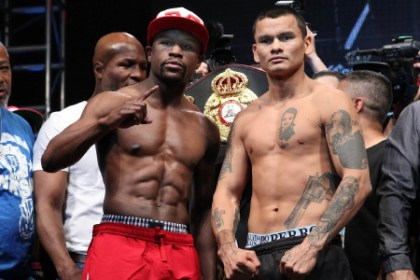 Self-proclaimed pound for pound king, Floyd Mayweather, Jr. has asked his September 13th challenger, Marcos Maidana to bet his entire fight purse if he believes that he can earn a victory this September in their title boxing tussle.  The Argentinean challenger has agreed to do so as long as he is able to select the type of gloves that he can wear.

There was controversy on the day of their first fight (May 03, 2014), when Marcos Maidana and his camp decided to use gloves that had less padding on them.  Floyd Mayweather and his camp were so infuriated that they threatened to call off the Showtime boxing extravaganza.

Maidana chose to call Floyd’s bluff so rather than cancel the entire boxing event and lose out on revenue from the sold out sports tickets and pay per view revenue, Mayweather paid Maidana an extra $1.5 million to use gloves that Mayweather saw as more “safe.”

Anyone who follows boxing matches, especially the pay per view ones, knows that Manny Pacquiao is the man that Floyd Mayweather, Jr. should be facing.  Marcos Maidana is a good fighter and he certainly gave Floyd hell in their first fight but Maidana is too slow and too stationary for Floyd.  Save your money and don’t order this fight, folks!! It’s not worth the price and until Mayweather sees a decline in his earnings, we will never get to see the pound for pound chicken face the true king, Manny Pacquiao.