Terence Crawford vs Yuriorkis Gamboa: Both Men Make Weight But Who Will Emerge Victorious? 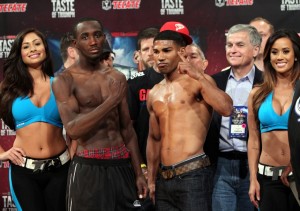 Boxing belts are a plenty in modern day boxing so let’s put aside the fact that this match up is for the WBO lightweight title.  It’s interesting to point out that both men share identical undefeated records (23-0, 16 KO’s), which is very rare.  Both men also came in below the mandatory weight of 135 pounds.  Crawford weighed in at 134.8 lbs and Gamboa came in at 134.4 lbs.  The two main eventers looked completely shredded at the scales and their intense staredown had to be broken up forcefully by their respected camps.  As a side note, Gamboa has had issues making weight in the past so the fact that he made weight tonight says a lot about his level of commitment for this fight.

Terence Crawford has defeated Ricky Burns in Burns’ hometown of Glasgow, Scotland and Crawford has also defeated hard hitting boxer, Breidis Prescott.  Ringside boxing gurus are all too familiar with the fact that Breidis Prescott is the man to hand Amir Khan his first professional loss via knockout in September 2008.  He knocked Khan out in the very first round.  Crawford’s victory over the Colombian (Breidis) spoke volumes about his skillset.

Yuriorkis Gamboa has defeated Orlando Salido, Jorge Solis, and the recently retired, Daniel Ponce De Leon.  Although that’s an impressive accomplishment, we cannot see anyone on his resume that has the boxing skills that Terence Crawford has.  And none of Gamboa’s victims are as hard hitting as Breidis Prescott.  Sure, 50 Cent is a great rapper/entertainer and a pretty good promoter, we just believe that his stable’s stud, Yuriorkis Gamboa is going to get outboxed by Terence Crawford in Crawford’s hometown of Omaha, Nebraska.  If the fight is close, we expect the judges to award the hometown boy to get the decision victory.

The co main event of this boxing event is a 10 round fight: Matt Korobov vs. Jose Uzcategui.  Both men weighed in at the middleweight limit of 160 pounds.

Here is the list of the fighters on the card along with what they weighed in (according to Fightnews.com):