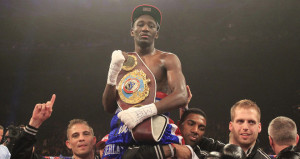 In a boxing event for the ages, Terence Crawford and Yuriorkis Gamboa thrilled the 11,000 fans at the CenturyLink Center with a back and forth contest for Crawford’s WBO lightweight boxing title. The back and forth action ended in round nine, with just seven seconds left when Crawford knocked out the Cuban star with a well timed right hand to Gamboa’s chin. The referee stopped the contest at 2:53 of round nine.

The first four rounds were very competitive but it seemed like the aggressive Gamboa was going to be too much for Crawford. But the Nebraskan made some adjustments throughout the fight and relied primarily on a southpaw stance. Crawford turned the tide in round five by knocking down Gamboa and dominating him for the entire round. Crawford also dropped Gamboa in round eight. Gamboa went into emergency mode in round nine and nearly knocked down Crawford but ended up getting over zealous and knocked down twice by the American. Crawford’s second knockdown of Gamboa in round nine was enough for the referee to stop the fight. Terence Crawford improves to (24-0, 17 KO’s) and Yuriorkis Gamboa is now (23-1, 16 KO’s).

HBO boxing and Top Rank put on a pretty good show for the fans tonight. The main event certainly delivered a boxing event full of excitement and non stop action. Although the CenturyLink Center was quite full and also quite partisan, this venue seems like an ideal place for HBO boxing and Top Rank to hold more boxing events. With Terence Crawford’s impressive win tonight, the new superstar will certainly be able to put “asses in seats” at the arena and generate huge interest and revenue for Top Rank and HBO.

Off the cuff, we can think of a blockbuster main event that Top Rank can hold at the CenturyLink Center if they can resolve matters with one of their fighters named Mikey Garcia. A match up between Mikey Garcia and Terence Crawford would be a blockbuster and could even be held on pay per view with a solid supporting undercard.

Here are the results of the other fights on the card (per Fightnews.com):

Unbeaten welterweight Mikael Zewski (24-0, 19 KOs) scored a punishing fourth round KO over Prince Doku Jr (18-6, 12 KOs) in a bout for the vacant NABF welterweight title. Zewski stalked Doku from the outset, applying pressure and winging big shots. Zewski finally battered Doku to the deck in round four for the count. Time was 1:05.

Unbeaten local bantamweight Johnny “Wite Boi” Determan (7-0, 6 KOs) was unlucky to get a no decision against journeyman Ernie Marquez (9-13-2, 3 KOs). Determan dropped Marquez with a body shot in round one but the bout was waved off after Marquez was cut over the left eye by an accidental headbutt in round three.
Hometown featherweight Bernard Davis (2-0, 0 KOs) looked good in shutting out Heath Cline (0-2, 0 KOs) over four rounds. Scores were 40-36 on all cards.

Unbeaten super bantamweight Vic Pasillas (8-0, 3 KOs) recovered from a third round knockdown to win a six round unanimous decision over Jiovany Fuentes (5-5, 4 KOs). Pasillas returned the favor by dropping Fuentes in round six. Scores were 58-54 on all cards.

In his pro debut, super welterweight Cody Crowley scored a second round KO against Ronnie Peterson (2-7, 3 KOs). Crowley dropped Peterson at the end of round one and twice more in round two. Peterson was counted out at 1:51.