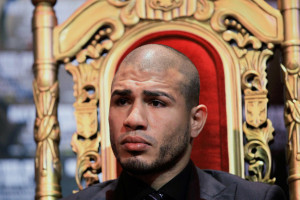 Boxing sites all over the world are abuzz about Miguel Cotto’s performance against Sergio Martinez on Saturday, June 07, 2014 at Madison Square Garden. The boxing event that took place at the “world’s most famous arena” before a sold out crowd of 21,000 plus was nothing shy of historic!!

Martinez’ corner knew that Sergio was taking too much punishment during the fight and that their fighter was never the same since being dropped three times in the first round alone and once again in the ninth round. The Argentinian’s face was marked up significantly from the sharp left jabs and left hooks that Cotto was landing at will all through the fight.

King Cotto has a world of opportunities after his win. He can command serious money against top fighters against Saul “Canelo” Alvarez, Erislandy Lara, Floyd Mayweather, and even Gennady Golovkin. A boxing event between Miguel and any of those aforementioned stars would generate HUGE pay per view sales, without a doubt. Boxing tickets would sell out instantly, bars would get jam packed to watch the Puerto Rican star fight, and people would order the pay per views in droves just to see Miguel Cotto put on another thriller.

The two best fight options for Cotto now are: the winner of Canelo vs Lara in July (which I believe will be won by Lara) or a rematch against Floyd Mayweather. Since Miguel Cotto isn’t tied down to either Top Rank Promotions or Golden Boy Promotions, this should be an easy fight for Mayweather’s people to set up.

After Miguel’s stunning performance tonight, I can’t imagine Floyd wanting to face him any time soon. If Marcos Maidana served up a serious ass kicking to Mayweather last month, Miguel Cotto would have a really great chance of defeating the pound for pound king. So for this reason alone, I would be willing to bet that Floyd Mayweather Jr. will not want any part of Miguel Cotto.

Puerto Rico can host the next Cotto fight later in the year against pretty much anyone. The arena would sell out completely and boxing fans would most likely buy the pay per view without hesitation. Why not make a Miguel Cotto vs Gennady Golovkin superfight in Puerto Rico some time in December if Golovkin can defeat Danny Geale next month? Both men have huge followings and both men are revered by boxing sites and gurus around the world.

If Canelo Alvarez can defeat Erislandy Lara in July, then a Cotto vs Canelo fight is a no brainer. Canelo is a Mexican icon and Cotto is a Puerto Rican King!! Can you imagine that fight being held at Cowboys Stadium in Arlington, Texas? Manny Pacquiao defeated Antonio Margarito there on November 13, 2010 before a roaring crowd of almost 42,000 fans. This fight would likely be just as big or even bigger, given both mens’ drawing power. Professional boxing has had a long history of Mexican fighter vs Puerto Rican fighter and this fight just might be the greatest one of them all.

Freddie Roach clearly deserves to be boxing coach or boxing trainer of the year once again. Sure, the year is not over but the man took a fading Miguel Cotto and transformed him into the killer machine that we saw tonight. Freddie and Miguel worked very hard for this victory and both men deserve to be praised.

So how about we crown Miguel Cotto the middleweight king at the Puerto Rican Day parade and we can crown Freddie Roach the king of boxing trainers?

Can anyone think of one good reason for not doing so?