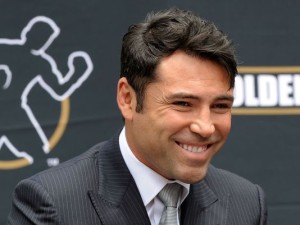 Oscar De La Hoya, the Golden Boy himself, is now at a crossroads in his career. He is no longer a boxer who has to make a decision about his boxing career. De La Hoya is a man who is the most successful boxer turned promoter of all time. Here’s thinking that Oscar can not only survive without Schaefer and Mayweather; De La Hoya WILL thrive without blood suckers like Floyd Mayweather, Al Haymon, and Richard Schaefer.

Richard Schaefer, the CEO of Oscar De La Hoya’s Golden Boy Promotions, resigned amid brewing tensions with founder, Oscar, over the better part of a year on June 03, 2014. The very next day, Floyd Mayweather, Jr. abandons Golden Boy Promotions. Mayweather claimed that he didn’t want to do business with Golden Boy without Schaefer. Al Haymon was the man who left with Schaefer, only to leave Oscar De La Hoya all alone and helpless.

Boxing sites have picked up the story and run with the angle that De La Hoya is screwed without Floyd Mayweather. Well folks, nothing could be further from the truth. First off, you will have to acknowledge that although Floyd Mayweather is his own promoter, Golden Boy has the best stable of junior welterweight, welterweight, and super welterweight fighters in the world.

Top Rank Promotions, run by Bob Arum, and HBO boxing have an exclusive agreement with one another. Golden Boy is exclusive to Showtime boxing, thanks to Stephen Espinoza. Floyd Mayweather has claimed in recent years that he will never do business with Bob Arum or Top Rank. Since Top Rank and Golden Boy are both the top boxing promotions in the world, who will Floyd fight?

Al Haymon, Richard Schaefer, and the Mayweather clan have robbed the boxing fans of great fights that fans have been clamoring for. The biggest fight in all of boxing would have been and would still be Manny Pacquiao vs Floyd Mayweather, Jr.

Regardless of who you believe would win, it has been Mayweather who has made all sorts of unreasonable demands to prevent the fight from happening. So Floyd Mayweather, cunningly used Golden Boy and Al Haymon to leave HBO for fear of pressure to fight Pacquiao.

Since Stephen Espinoza, Golden Boy’s lead attorney at one time, got a lucrative deal to sign with Showtime boxing and run the show there in 2011, that was the golden ticket that Floyd needed. He brokered an unprecedented six fight deal worth $250 million with Showtime. So now that Floyd fights exclusively for Showtime and Pacquiao fights exclusively for HBO, the superfight won’t happen, right? Wrong. Showtime and HBO would work together for a superfight but Floyd clearly wants no part of Pacquiao.

So back to Oscar De La Hoya and his Golden Boy Promotions. Oscar has rekindled his relationship with Top Rank boss, Bob Arum, recently. Arum has been in the boxing business for over 50 years. Arum is the man who can help Oscar the way Schaefer did in exchange for an agreement to make superfights such as Manny Pacquiao vs Canelo Alvarez, Ruslan Provodnikov vs Danny Garcia, Timothy Bradley vs Kieth Thurman, Juan Manuel Marquez vs Shawn Porter.

If De La Hoya and Bob Arum can work together, then the sky’s the limit for both men. There would be plenty of money to be made by Showtime and HBO.

With the exception of Mayweather vs Canelo, Showtime lost money on Mayweather vs Guerrero and Mayweather vs Maidana. The Canelo fight was the only one that had huge pay per view buys. The other two each did around 800,000 buys. Why would Showtime continue to hemorrhage cash on Mayweather if he’s not breaking one million buys on every fight? And with no one left for Mayweather to fight since he refuses to work with Golden Boy and Top Rank, who really needs who now?

Oscar De La Hoya holds a lot more power in this dispute than boxing sites have given him credit for. We can only hope that Showtime is wise enough to terminate Floyd’s contract and maybe let ESPN boxing make a bid for him. As a side note, I think it’s sad that boxing isn’t run like the UFC. If it did, Floyd would have already fought Pacquiao in 2009 and Pacquiao would have already knocked him out.

Showtime boxing has come a long way and I believe that it is the leader in boxing since it has Golden Boy promoted fighters. Golden Boy belongs to Oscar De La Hoya. And so Oscar has all the chips on his side of the table. De La Hoya and Golden Boy should move on without Richard Schaefer and Floyd Mayweather, Jr. Oscar just doesn’t need them, and quite frankly, neither do the fans.