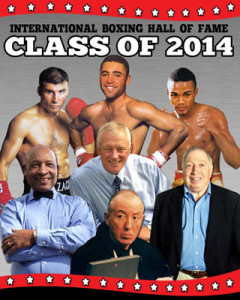 This was the 25th anniversary of the boxing hall of fame and a couple of thousand fans turned out this past weekend to partake in the festivities and meet the modern day boxing legends.

Bob Arum, Mickey Ward, George Foreman, Erik Morales, Don King, Glen Johnson, and Andre Ward were just a few of the guest speakers who were on hand at the ceremony.

Oscar De La Hoya, WBO president Paco Valcarcel, and Andre Ward, each pledged $50,000 towards the boxing hall of fame. It was a very classy thing for them to do as funding for the hall of fame is much needed. Thankfully, grants and donations help to pay for maintenance and operating expenses.

The inductees were all deserving of their inductions and we here at ringsideboxingevent.com congratulate them all for their accomplishments and accolades.