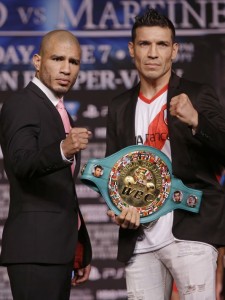 Middleweight king, Sergio Martinez defends his WBC middleweight title on Saturday, June 07, 2014 against future hall of famer, Miguel Cotto. As a side note, both men weighed in below the 160 pound limit for their match up.

Top Tank Promotions, operated by legendary Bob Arum, is promoting the fight through their exclusive deal with HBO Boxing, live from the world’s most famous arena, Madison Square Garden. (This fight is on pay per view and is well worth the price)

Boxing belts don’t even matter when you consider the fact that both Miguel Cotto and Sergio Martinez are elite athletes who will most likely put on one hell of a show.

This is a can’t miss fight!!

What are your thoughts on the fight? Please share your comments below.