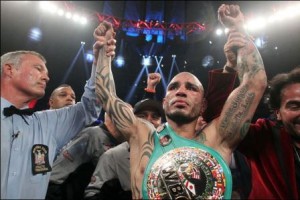 This was a historic boxing event because this was Miguel Cotto’s very first WBC boxing title.  The other reason is that Cotto is the very first Puerto Rican four division boxing champion in history.  Those in attendance in San Jose, Puerto Rico cheered on as Sulaiman presented the belt to the home town star and made his impressive June 07th victory over Sergio Martinez official.

The staff here at Ringside Boxing Event would like to congratulate Miguel Cotto on his accomplishments and we wish him the very best of luck in his illustrious career.