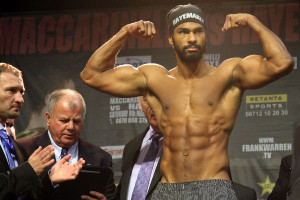 David Haye, world heavyweight boxing champion, has decided that he will no longer eat meat. Haye is making it well known that he is becoming a vegan and that veganism is the way to go.

The man whom many refer to as “The Hayemaker,” stated that he had seen some documentaries about the slaughtering of animals and their living conditions. He no longer had the urge to eat slaughtered animals and he has decided to just become vegan. This all happened six months ago.

Haye (26-2, 24 KO’s), looked into the plant based diet thoroughly as he was concerned about his daily intake of protein, as all world class athletes are. The British heavyweight, who was once a cruiserweight, learned that there were many vegan options that were even better than the option of eating meat. Not only would the plant based diet provide the right kind and amount of protein, but it would rejuvenate the boxer into top form. (As a side note, many other athletes have turned to veganism with great success: Mike Tyson, Timothy Bradley, and MMA star Jake Shields)

David Haye had sustained injuries over the last couple of years and so “The Hayemaker” is on a quest to return to tip top form and once again become a world heavyweight boxing champion. Could a rematch with current champion, Wladimir Klitchko be on the horizon? Or should the 33 year old Haye just hang up his gloves?