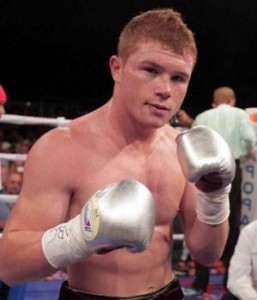 Mexican boxing sensation, “Canelo” Alvarez (43-1-1, 31 KO’s), who faces his toughest test to date in the junior middleweight division against Erislandy Lara on Showtime boxing pay per view on July 12th, took a few minutes to explain the origin of his Canelo nickname. Alvarez explained that it was his trainer, Jose Reynoso, who gave him that name when he was training at Reynoso’s Gym at age 12.

Alvarez acknowledged that he has a unique look with the red hair and freckles, so his trainer started calling him “Canelito” during his early training years. Canelito means little cinnamon in Spanish. As Alvarez got older, Reynoso decided to call him “Canelo” and the name just stuck.

Canelo and his team realized that his unique look and unique moniker, Canelo, would be a great way to brand him to the American boxing scene. It wasn’t long before Alvarez went on to thrill Mexican and American fans alike.