Crossfit Training Has Added A World Champion Boxer To Its Roster 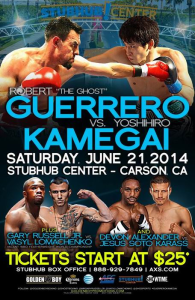 Robert “The Ghost” Guerrero (31-2-1, 18 KO’s) is the newest member of the Crossfit movement. The Californian, who has held six boxing titles in four weight divisions, will face Japan’s Yoshihiro Kamegai (24-1-1, 21 KO’s) on June 21, 2014, live from the Stub Hub Center in Guerrero’s backyard of Carson, California. Guerrero vs Kamegai is the scheduled main event of Golden Boy Promotions’ Showtime Boxing.

Since losing to Floyd Mayweather in May 2013 (Guerrero was Mayweather’s first opponent in his six fight mega deal with Showtime), Guerrero has not fought anyone. Instead, he has kept himself in shape with Crossfit under the guidance of Crossfit master trainer, Brian “Tosh” Chontosh. Although Robert is still trained by his father, Ruben Guerrero, “The Ghost” has implemented Crossfit into his regimen to give him the increased strength, endurance, flexibility, stamina, and cardiovascular conditioning to give him an edge in the ring.

Guerrero vs Kamegai is a scheduled 12 round welterweight showdown that is definitely aimed to please as both men love to let their hands go. The co main event is also a 12 round fight between Gary Russell, Jr. and Ukrainian Vasyl Lomachenko for the WBO featherweight title, which can also end up being a barn burner. This is a must see card that Showtime Boxing will present at 10pm EST on June 21, 2014.

Besides showing off a newly sculpted physique through Crossfit training, Robert Guerrero hopes to get himself back into the mix of the welterweight division and hopefully face off against welterweight kings, Floyd Mayweather and/or Manny Pacquiao.

Will Crossfit be just what Guerrero needs to accomplish his goal? If so, will the Crossfit movement sweep through professional boxing?