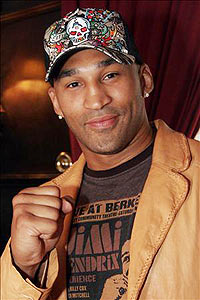 George Foreman, one of the greatest heavyweight boxing champions of all time, became the oldest man to win the heavyweight title in 1994 against feared heavyweight, Michael Moorer, who sported an impressive (35-0) record at the time. Foreman was 45 years old in 1994 when he defeated Moorer by knockout in the 10th round.

Fres Oquendo turned 41 on April 01, 2014 and his opponent, Ruslan Chagaev, is just 35 years old. Their WBA heavyweight title clash will take place from Grozny, Chechnya on July 06, 2014. Although Oquendo is training very hard in Chicago, this fight won’t have the same marketing and mass appeal as the Foreman-Moorer fight from 1994. At this time, the fight is not being televised here in the United States so even if Oquendo is victorious, there is little chance that his victory will mean much.

Unfortunate, Fres does not have the same name recognition that George Foreman, Mike Tyson, Evander Holyfield, or Muhammed Ali have. And that pretty much explains the lack of interest in this fight.

However, if you are into sports betting, there is a high likelihood that Oquendo is a HUGE underdog in this fight. Unfortunately, what is not likely is a Fres Oquendo win against the man who has only lost to Alexander Povetkin and Wladimir Klitchko. Let’s hope that after Chagaev’s win over Fres Oquendo in July, there won’t be any talk of a rematch or another comeback by the 41 year old Puerto Rican challenger.