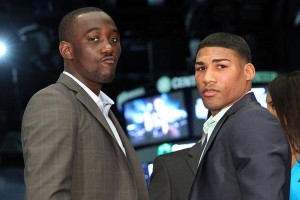 Terence Crawford will defend his newly won WBO lightweight boxing title on Saturday, June 21, 2014 against Yuriorkis Gamboa at the Century Link Center in Omaha, Nebraska.  This match up is unique not just because both undefeated fighters sport an identical record of (23-0, 16 KO’s), but also because this is the first major boxing title fight in Omaha since Joe Frazier defended his title in 1972 against Nebraskan, Ron Stander.

The boxing event will be shown on HBO boxing on Saturday night with a co main event featuring Matt Korobov vs Jose Uzcategui (both men are undefeated).  This match up will be for the vacant WBO Inter-Continental middleweight boxing title.  Unlike the main event, this bout is scheduled to be a 10 rounder.  As a note, this boxing event is being presented by Bob Arum and Top Rank Promotions.

Ringside boxing fans will be in for a real treat because on paper, this card looks very good.  Sure, anything can happen in combat sports but we have a feeling that the main event will showcase high level boxing for true and casual boxing fans alike.

Will Gamboa steamroll Crawford like many people expect? Or will Crawford be too much for Gamboa? Please share your comments below.  And please check back for our prediction on the fight.