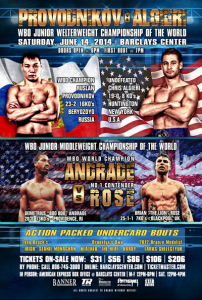 The man referred to as the “Siberian Rocky” Ruslan Provodnikov (23-2, 16 KO’s) will be defending his WBO junior welterweight boxing title against Long Island’s Chris Algieri (19-0, 8 KO’s) on Saturday night, June 14th live from the stunning Barclays Center in Brooklyn, New York.  The fight will be televised on HBO after dark and is being promoted by Top Rank Promotions.

Provodnikov is an intense brawler and Algieri is a textbook boxer with a diverse skillset.  But don’t be mistaken; Provodnikov is one of the most fearsome fighters in all combat sports.  His boxing skillset is quite substantial but it’s his offense that stands out among all fight fans.  Chris Algieri turned to pro boxing after a short stint in kickboxing.  Chris has typically been the underdog in most of his matches but has managed to come out on top every single time, as he is still undefeated.

Although Chris Algieri is an undefeated hometown boy, he is also a pretty big underdog in this event..  For those who are in to sports betting, Provodnikov is a favorite at (-525) over Algieri (+375).

Brooklyn fans might be in for one hell of a fight between these two men.  Styles make fights and this fight can be a lot more intriguing than most boxing sites and ringside boxing experts are predicting.

The co main event features Demetrius Andrade (20-0, 13 KO’s) against Brian Rose (25-1-1, 7 KO’s).  Both fights will be shown after the replay of the Miguel Cotto vs Sergio Martinez from this past weekend.

HBO Boxing this weekend is a must see!  Will we see an upset? If so, will it be accomplished by Algieri or Rose?